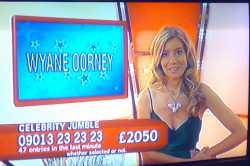 Don’t you hate those disgustingly easy quiz “questions” on TV? IIRC the reason for the simple questions is that the TV companies can charge people to enter a competition but avoid lottery regulations by claiming there is an element of “skill” in the game.

Anyway, at 2AM this morning while working on a web site I spotted this beauty of a jumbled footballer’s name on Channel Five‘s “Five US” channel courtesy of Quiz Call. And at the very least I counted 300 odd suckers who entered this in the space of 5 minutes.

As if the “mystery” footballer wasn’t easy enough, they gave the following clues (among others):

I ask you, with questions like this, who are they trying to kid? I don’t remember exactly what lottery laws they’re trying to avoid, but I thought Ofcom (or someone) were supposed to be clamping down on this abuse. Cle arly doing a bang up job there.

An experienced IT professional, I used to run a number of small websites and spend a lot of time tinkering with my sites or my PC - back when I had free time. View all posts by nerd.

This site uses Akismet to reduce spam. Learn how your comment data is processed.